The market reaction to Fidelity’s introduction of a “fulcrum” management fee model in its UK fund range from March 2018 has been – well – a bit underwhelming so far.

Objections have included that base management fees are not changing much, that total fees are still too expensive, especially if the fund underperforms, and that it’s too complex.

But is this fair? Let’s look at the before and after:

In summary, Fidelity will simultaneously lower the management fee by 10bps, and add a symmetrical performance fee of 10% of relative 3-year net performance, to a maximum of 20bps in either direction.

This has been communicated with a diagram similar to that appearing as today’s Figure 1. 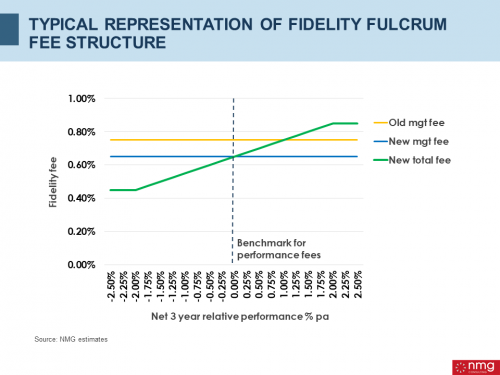 It’s not the user friendliest diagram, and we’re not sure we’d want to try to explain it to a retail investor. However, from Fidelity’s perspective this structure improves alignment with customers, while responding to demands for lower headline fees.

A 10bps fee reduction may not sound like much in a management fee of 75bps, but it’s a much larger proportion of profit margin which is being surrendered; or strictly speaking exchanged for potential performance fee exposure. That performance fee could turn out to be negative of course, so the potential reduction in profit margins in this new model could be substantial.

You could understand if Fidelity is feeling a bit under-appreciated at this point, despite the room for improvement on communication.

That said, we see an alternative way of thinking about the new fee structure which is less complicated and shows the change in a more radical light. This is shown in today’s Figure 2.

Now the fee structure looks very different, despite working in exactly the same way. The before and after comparison is also easier (in our view):

In our alternative view, Fidelity is effectively lowering its base management fee by a much larger 30bps to 0.45% pa, but then receives a performance fee of 10% of 3-year returns above the fund’s benchmark less 1% pa (to 0.4% pa, but with no downside).

This view reveals a much bigger change, and it’s also simpler to understand and explain – other than the oddity of performance fees kicking in slightly below benchmark.

This is a brave step towards fairer pricing. It puts the right issues on the table but there is more to be done to address them. What is the right base management fee? What is the right performance benchmark and how much of that outperformance do managers deserve? And will we be able to explain it to investors? The upwards march of passive market share seems unstoppable. But there are reasons to think why, in...

What to make of the FCA’s PS18/8 Asset Management Study Remedies released last week? It looks…