DC pensions: opportunity and challenges as AE turns flows into a flood

DC pensions: opportunity and challenges as AE turns flows into a flood

The UK is experiencing a pensions revolution at a speed with little precedent globally.  Two of the three main components are playing out already, and the third is about to do so:

The first two are transforming the architecture of UK pensions from DB+annuity to DC+drawdown.  This has already produced a large adjustment of flows in the retirement income market, although the stock of assets will alter more gradually over coming years.

The third, auto-enrolment (AE) pension contribution rates rising from 2% to 8%, sets a floor for all DC funds.  Interacting with higher wages via the “living wage” initiative, this will produce a substantial DC pensions flow opportunity, which we estimate at >£20bn pa by 2019.

What has been a relatively modest opportunity in terms of both stock and flow, will become a flood which over time will create one of the largest asset pools in the UK system.

An existing company with 50-249 employees would have staged for auto-enrolment during 2014, so for three years, minimum contribution rates have been idling at 2% pa.  In the space of just 12 months from April 2018, those rates will quadruple.

The comparison with the Australian experience is instructive in terms of the UK opportunity and challenges: 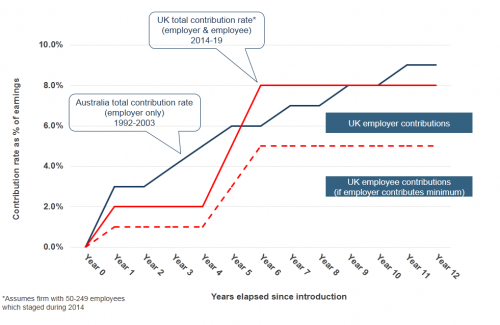 Australian minimum contributions rose gradually from zero to 9% over the space of 11 years.  Designed as 100% employer contributions, a key feature was a salary-pension trade-off approach.  For example, an employee who would normally have received a 4% salary increase in a year with a scheduled lift in the pension contribution rate would instead receive 3%, the extra 1% being added to their pension.

This was much easier to implement in 1991-2003.  Inflation and average salary increases were higher – 4% was not uncommon – which made trade-offs easier.  Notwithstanding the compulsory nature of the Australian system, in practical terms this greatly reduced push-back.

The UK design is much more challenging:

This is bold and risky in the prevailing conditions.  The probability of employee push-back is higher, and a lack of compulsion means they can act on it via opt-out or cessation of active membership.

So what is the risk of combined opt-out and cessation rates rising, how can DC pension providers mitigate it, and what is the likely impact on the opportunity size?

The Treasury and DWP appear rather insouciant at present, assuming that the current opt-out rate of ~10% will hold.  That would be welcome, but appears rather optimistic. The golden rule is to never reduce take-home pay, which is more likely to break behavioural inertia.

Unless typical salary increases start escalating above 3% and /or employers contribute more than their minimum rate, reductions in take-home pay are likely.  We believe it is sensible to work on an assumption that the opt-out+cessation rate approximately doubles – although we expect rates and impacts to vary materially by segment and over time.

DC pension providers need to spend the next six months working closely with employers and members on a range of strategies to minimise member loss rates:

The good news is that even with relatively elevated opt-out rates, the flow opportunity for DC pension providers (and indirectly asset managers and other suppliers), will be substantial.  The economics of DC are difficult however – in a future Citylogue edition we will look at whether and how this can be a profitable opportunity.

What is good flow news for DC providers may also create challenges elsewhere.  Peoples’ ability to save is limited – increased contribution rates to DC pensions may result in reductions elsewhere, such as ISAs.  The ability to make integrated savings offers will be increasingly important.

Our Library of Insights: Trusted by industry leaders.

Follow NMG Consulting on LinkedIn and be the first to read our latest insights and company news.