Lots of robo, not much advice … part I

Lots of robo, not much advice … part I

Ever since fintechs and asset managers led the charge in launching robo-advice offerings in Australia; expectations have been building that we’d soon see the democratisation of personal advice through digital channels. Advice of the type afforded by only wealthy Australians might soon be made accessible to anyone through a proposition whose only discriminating factor is whether or not you have an internet connection. Suffice to say, that excitement has waned somewhat as the industry continues to scan the horizon and no such unicorn has come merrily bounding over.

That’s not to say there aren’t glimmers of hope – certainly technology is steadily catching up, and new partnerships between providers are being announced almost weekly – but ultimately, the industry has been too narrowly focused in its attempt to bring digital advice to the mainstream. To-date, available propositions fall mostly into two categories: investment advice and retirement calculators.

Having led the vanguard with what most people think of as ‘robo-advice’, digital investment advice providers typically seek to algorithmically match customers’ risk or behaviour profiles and discretionary investment goals to model portfolios. Think of it as a modern version of the balanced fund with a regular savings plan. Such offers certainly have a clear mechanism for revenue generation (investments are normally passive with a healthy mark-up), but the market need they’re attempting to address is less obvious. In a defined contribution pension market where mandated pension saving is universal, the value of advice that operates specifically outside of this environment is questionable. How many Australian consumers have both the means and the desire to invest outside of super and property? 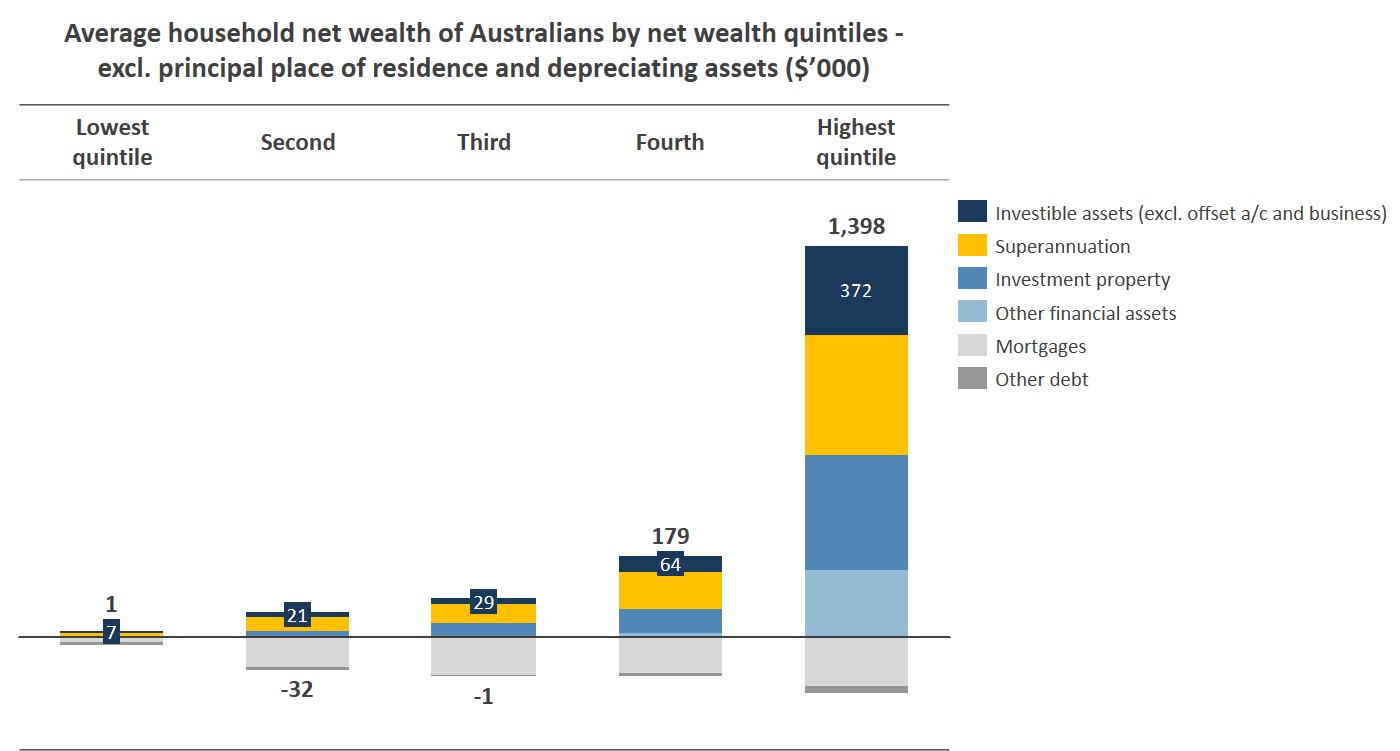 As the chart shows, the proportion of the population with investible assets for which it might make financial sense to invest through such offerings are of course the wealthiest 20% of Australians – the very same people who can already afford holistic personal advice and, if nearing retirement, are in all likelihood already in an advised relationship. And if we use the conventional wisdom that debt should be extinguished before investing, given the level of debt held by the majority of Australians– would starting a discretionary savings plan really be in the best interests of the other 80%? It is therefore hard to imagine how digital investment advice providers can successfully target a large enough share of Australian consumers to be anything more than just a fringe player in any future digital advice market.

So if direct discretionary investing is not the main game for digital advice, then what is?

For years there has been significant industry discussion of Australia’s so-called advice gap – that proportion of the adult population who need advice but can’t afford to see a financial adviser (the other 80%) or don’t value their service.

Digital advice, in theory, is well suited to addressing both the issue of affordability and of value, at least where it pertains to people’s confidence in being able to help themselves, but we are yet to see propositions that genuinely tackle the advice gap effectively.

Taking the investment concept forward, we have since seen an explosion in algorithmic advice tools designed to solve specifically for accumulation towards retirement. Such concepts are pitched at providing simple super contribution and investment strategy advice over and above the ubiquitous generic calculators used for education and engagement purposes. Primarily in the form of intra-fund advice tools for member use, or attached to specific retirement products, these tools seek to determine the required contributions and asset allocations that a person might use to meet stated retirement income goals.

While such tools are certainly a leap forward in digitising advice for direct consumption, again for most Australians, the scope of the advice on offer is far too limited. Retiring for most Australians is more complex than rolling over what’s been accumulated in super into an account based pension. Australians are working for longer, carrying more debt, and living longer – add to that the constant change in regulations governing the (already very complex) ecosystem – what purpose do such tools serve other than to re-emphasize how important, but out of reach, affordable holistic personal advice remains?

Thankfully, all is not lost. In our next instalment on digital advice we’ll look at the next wave of digital advice business models we can expect to see, and just who is poised to win – stay tuned!

Click to read Lots of robo, not much advice … Part II

Lots of robo, not much advice … part II

In our last installment, we discussed the current state of the digital advice landscape – an underwhelming…

Lots of robo, not much advice … part 3 – ‘incremental advice’ paving the way for personal advice in industry funds

Since our last installment, where we discussed the industry developments targeting the ‘sweet spot’ of self-guided, simple…