401(k) Distribution: The Decade Just Ended – fifth in a series

Remember insurance-based 401(k) advisors?  Paragons of proprietary funds and group annuity contracts they may have been, but they ruled the roost only a decade ago, often with large and stable books of business.

In 2005, fully 37% of 401(k) advisors identified themselves as affiliated with a life agency, an insurance brokerage or an (old school) commission-based benefits consultant.  Only wirehouse-based advisors came close in terms of channel penetration and then only at 25%. 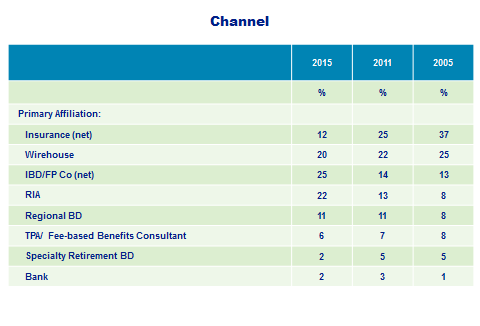 Now 12%, insurance penetration today is barely a third of what it was a decade ago and wirehouses have drifted down to 20%.  The new kids on the block, of course, are “pure” RIAs (almost entirely fee-based) and independent broker/dealers and advisors affiliated with financial planning companies.

In fairness, attrition from the insurance channel resulted from rebranding and reimaging of some practices and the actual disappearance of others.  The result is a vestigial insurance channel characterized by nothing so much as commission income and an enduring preference for due diligence investment platforms over open architecture.

Wirehouses have weathered the storm with more success in spite of their traditional reticence to embrace a fiduciary role.  Our most recent measurement shows a slight uptick in channel share from a low of 18% in 2013.

That fee-based compensation and open architecture drive the composition of the channel today is nowhere more evident than in the growth of the “pure” RIA, which has nearly tripled as a percentage of all 401(k) advisors over the decade.  Regional BDs, producing TPAs, fee-based benefits consultants and banks are more or less holding their own.

It’s not difficult to see the traditional insurance footprint all but disappearing from the 401(k) landscape in the years ahead.  It’s more difficult to see what comes next.  Yes, there’s plenty of room for the “pure” RIA to grow.  The big question is what becomes of the hybrid RIA or dually registered representative, who plays in many traditional channels.