Back to Fully Bundled?

Back to Fully Bundled?

401(k) Distribution: The Decade Just Ended – sixth in a series

The once unstoppable TPA interface service model (think John Hancock or Nationwide) was imploding in the face of a new, completely unbundled service model—which we defined as advisor-selected funds on a trading platform paired with an independent TPA providing daily record keeping, compliance and administration.  In this new world, local and regional players were teaming up to displace traditional national providers. It was all about cutting costs and having access to pure open architecture; this new service model offered both.  Of course it cut out a lot of service, support and customization as well. 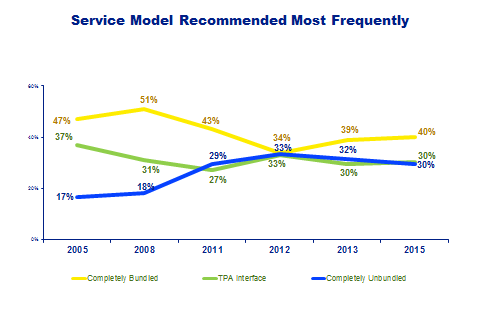 Then in 2012 the lines converged as advisors trifurcated their service model preferences.  One-third stuck with the TPA interface approach; one-third opted for the completely unbundled model and one third went with the traditional, fully bundled program.

In the years since, advisors have pumped air into the fully bundled model even as the two unbundled approaches have been running about flat, a startling reversal of trends that made sense and seemed to be a secular shift in the way the 401(k) product was delivered.

Did advisors pick bad funds?  Did local TPAs drop the ball on recordkeeping?  Did trading platforms fail to deliver?  Did plan sponsors pull the plug on this ersatz bundled program delivered without a national provider in sight?

None of the above, as far as we can tell.  For in the background cost was receding (however glacially and imperceptibly) as the animating driver of provider selection even as service and customization were staging a comeback.  How better to package robust investment choices, world class participant education and communication and flawless service to plan sponsors than through a fully bundled service model (even if at somewhat higher cost)? Amplifying the trend was the emerging focus on retirement readiness, about which most TPAs and independent recordkeepers had little to say.

Does this work in reverse?  With storm clouds on the horizon from threats in the real economy and pressure from relentlessly rising health benefit expenses, we may soon find out.