401(k) Distribution: The Decade Just Ended – Second in a Series

With the Department of Labor’s proposed fiduciary rule still under consideration, it’s informative to step back to see how 401(k) advisors themselves describe their responsibilities.  Last year, two-thirds said they think of themselves as a fiduciary on the plans they sell. 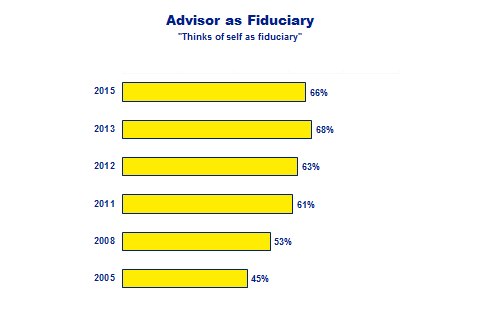 The trend through the decade shows steady if decelerating growth in the proportion of advisors considering themselves a fiduciary, from 45% in 2005 to 68% in 2013.  Then, last year, the figure dipped slightly.

Looking back, Heavy advisors (those deriving 60% of more of their income from 401(k)), were first to the table; in the six years to 2011the share of Heavies describing themselves as a fiduciary exploded by nearly 30 points to 84%. 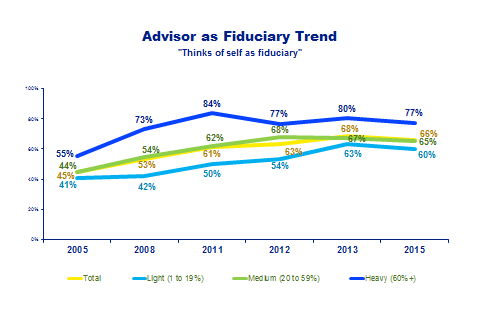 But then, oddly enough, it began drifting down, settling at 77% last year. Meanwhile, the proportion of Light and Medium advisors who think of themselves as fiduciaries continued to advance until 2013, whereupon they too headed slightly south in our most recent measurement.

Whether advisors are being more cautious about how they define a fiduciary role or whether fewer actually see themselves in this capacity with fiduciary responsibility under a microscope is hard to say. All we know from this casual, self-reported metric is that fiduciaries may have topped out, at least for now.