401(k) Distribution: The Decade Just Ended – seventh in a series

Although more than one in five 401(k) advisors (22%) describe their primary affiliation as a registered investment advisor, a total of 57% write at least some business as an RIA (or as investment advisor representative (IAR) under a corporate RIA).  This ranges from 73% of Heavy advisors (deriving 60% or more of their practice income from 401(k)) to 43% of Lights.  These proportions have increased steadily for advisors of all stripes since we introduced the question in 2011. 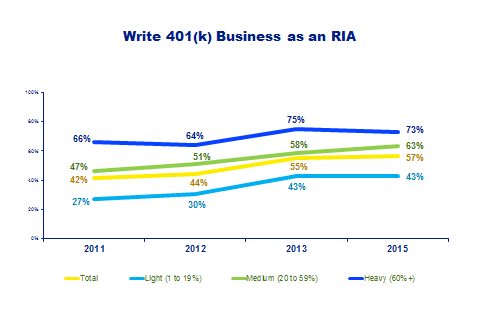 The distinction between “pure” and hybrid RIAs in the 401(k) space is striking. Although the two have about the same tenure in the business, hybrid RIAs’ 401(k) books of business are about half again larger than “pure” RIAs.  Nearly nine in ten “pure” RIAs describe themselves as mainly fee-based while close to four in ten hybrids are either mainly commission-based or about evenly divided between fees and commissions.  Hybrid RIAs are likelier than all 401(k) advisors to reside in wirehouses, independent and regional broker/dealers, producing TPA firms and fee-based benefit consulting firms.

Finally, hybrids are most comfortable with a fully bundled service model while “pure” RIAs have a disproportionate fondness for a fully unbundled product (funds they recommend on a trading platform plus an independent recordkeeper).  Wave of the future they may be, but “pure” RIAs probably need to revisit their cultish service model outlook to crack larger plans.

Our first Retirement Services Intermediaries study launched in 2000; these findings are based on selected waves carried out between 2005 and 2015. RSI studies are conducted by telephone, typically among a representative cross-section of 600 or more advisors deriving income from 401(k) plans. RSI 10 is currently available.