Triumph of the Heavies?

Triumph of the Heavies?

401(k) Distribution: The Decade Just Ended – Fourth in a Series

A decade ago, Heavy advisors (those deriving 60% or more of their income from 401(k)) constituted 18% of the channel and accounted for 55% of asset sales.  Last year they constituted 26% of the channel and commanded 63% of the asset sales.  They are by far the most sought-after and well-tended advisors in the business, even more so at the end of the decade than at the beginning.  Case closed? 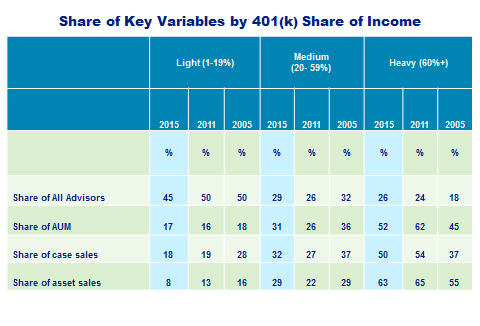 Maybe not so fast.

Picking up the slack are ascendant Medium advisors (20% to < 60% of income).  This group (now 29% of all 401(k) advisors) rang up handsome increases in shares of AUM, case sales and asset sales between 2011 and 2015.  Our hypothesis is that more and more wealth management RIAs are finding 401(k) a comfortable extension of their fee-based, open architecture investment culture.  They are contributing to the changing face of the channel.

Unsurprisingly, Light advisors (under 20% of their income from 401(k)) look to be on the dinosaur track as their channel metrics shrivel.  At eight percent, their share of asset sales is half of what is was in 2005 and their share of case sales has dropped ten points.  Their share of AUM is holding up, but for how much longer?

What will the next decade bring?  Advisors who hit the 20% threshold in terms of 401(k) share of income (Mediums in our parlance) almost always express a commitment to growing their 401(k) business.  If we’re right that ascendant Mediums represent relative newcomers to the business, it can only mean renewed growth and momentum for the specialist advisor in the years ahead.