The DB transfer market has been a key new source of retail flows in recent years but is under considerable regulatory pressure. Although run rates are well off their peak, underlying dynamics mean that DB transfers should continue to play an important role in new flows.

What should insights and strategy teams assume for DB transfers? This is an important question in a UK wealth market which has single digit organic growth. With workplace DC still in its infancy, DB transfers enabled by pensions freedoms have become an important source of customer generation for advisers and for flows into the retail system.

Exactly how important is an open question. Data is reported only intermittently and is often incomplete.

What is well known about DB transfers however are the FCA’s reservations; last month it reiterated its concerns over what it saw as excessive volumes of transfer recommendations, based on a survey of ~3,000 firms. But are DB transfers volumes really excessive as the FCA claims? The FCA bases this conclusion on survey results indicating the following:

Although these are big numbers, they are perhaps not as large as they seem.

Firstly, the total number of DB members taking advice looks understated. Only ~1,300 of the 3,000 firms surveyed (44%) provided data on DB members triaged out. So the real number will be bigger than 59,000. If the 1,300 which provided data are market representative – the total number of DB members triaged out would have been over 130,000. In which case, the transfer recommendation rate drops from the FCA’s 55% rate – to something closer to 45%. This is still high compared to NMG’s adviser benchmarking studies, which suggests an average of 5 or more “no actions” for every DB transfer recommendation.

No doubt there have been examples of poor and / or conflicted advice (from advisers and employers) provided in respect of DB transfers. DB members need to be protected from that. But given the bigger picture this does not seem to be a problem of systemic proportions.

Although we question some of the conclusions, the FCA’s survey outcomes – when cross-referenced with other data sources – provide useful insights to the sizing of the DB transfer market. A key assumption is the average transfer value, which the FCA reports as £352,000. We see that as high – so have assumed £300,000 as a more conservative figure. This leads us to the NMG view of rolling annual DB transfer volumes, depicted in Figure 1 below. 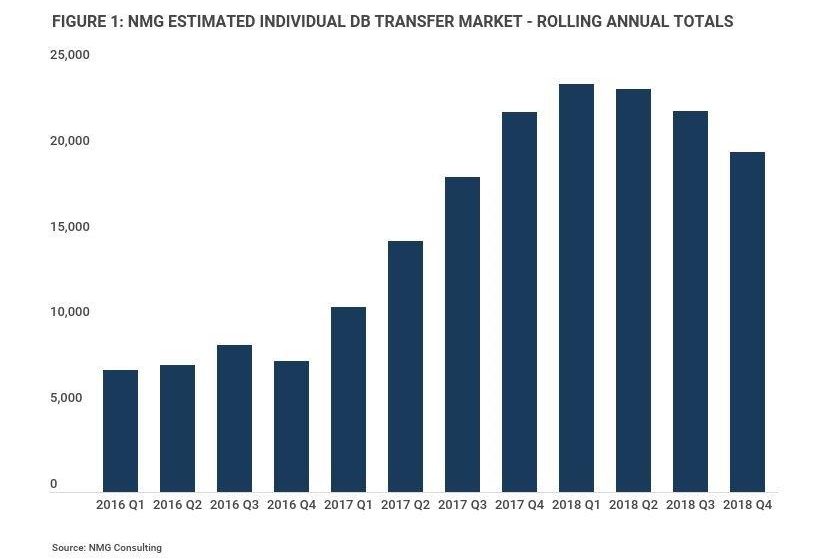 Our view is that DB individual transfers (ie excluding bulk transfers) peaked in the first half of 2018 at around £25bn pa. By the end of 2018, the annual run rate was under £20bn pa, but the quarterly run rate was lower again, perhaps 40% down on its peak.

Our analysis shows that there has already been a significant correction in DB transfer volumes. So what should be assumed for sizing as you make projections for 2020 and beyond? At this time, we believe ~£15bn pa is an appropriate figure; indicating a still healthy market segment.

This of course depends on factors including the path of future regulation and the approach of PI insurers. DB transfer activity exploiting high transfer values will give way to activity based on the value that good advice can add via pension consolidation strategies. This also recognises that many DB members have perfectly rational preferences to transfer. In the contest between control, capital access, and flexibility vs guarantees and mortality protection, experience indicates that the former combination usually wins in the mind of the consumer.